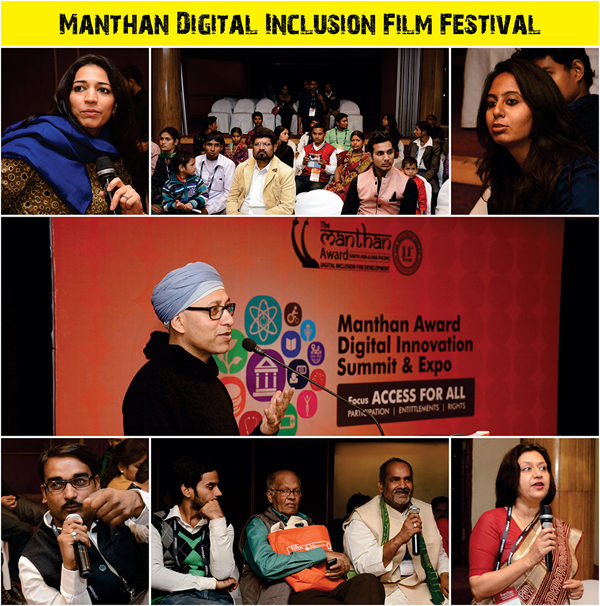 Digital Empowerment Foundation stretched the envelope within Manthan Awards this year. We are embarked on a brand new journey, ‘Manthan Digital Inclusion Film Festival’, which was held on the side-lines of Manthan Awards on 4th of December, in Habitat Centre, New Delhi.

We aimed for ‘Manthan Digital Inclusion Film Festival’, to be about communal participation, engagment, learning, awareness and discussion through creative and innovative films produced on the subject of digital empowerment of grassroots communities through various ICT tools such as broadband, mobile, community radio, TV, Website, IVR, Computers.

This year we screened films from India, Bangladesh and Nepal. The subjects ranged from community radio, health, wireless network, use of social media for development etc.

The film festival opened with a small introductory speech by the Founder and Director of Digital Empowerment Foundation, Mr. Osama Manzar. He shared his longstanding vision of initiating a film festival aimed at screening and encouraging films on the use of ICT for development.

The first screening of the festival couldn’t have been more appropriate than ‘No Problem’ by Yasmin Kidwai. The film follows one batch of women trainees from Africa on a life-altering six month journey to Tilonia (Rajasthan), home of Barefoot College. Starting with a bewildered arrival at an unfamiliar international airport, they finally return triumphant as Barefoot Solar Engineers, bringing light into remote African villages where electricity has so far been only a dream. It was the longest film of the festival running into 57 minutes. The screening was followed by a brief Q&A session with the director of the film Yasmin Kidwai, who shared her experiences of making the film.

Afternoon session began the second screening of the festival ‘Treasure Caretaker Training, Digital Monastery Project’ by Ranjit Makkuni and Ethan Neville. It was about The Digital Monastery Project which was implemented in the Spring, 2014 in the Namgyal Institute of Tibetology (Sikkim), to teach monks, nuns and cultural caretakers to create confidential digital inventories of their monastery and museum treasures by use of their own mobile phones and tablets. Ann Shaftel, the Director of the project was there in person to take questions from the inquisitive audience who were fascinated by the film and project.

Fourth screening was an exciting film, ‘Radio Woman of Patara’ by a team of passionate young film-makers from Hyderabad, Shawn Sebastian, Fazil NC, Tejasvi Dantuluri. It’s about Ramvati, a tribal woman from Madhya Pradesh and how she made community radio a tool of empowerment. It bagged third price at UNESCO-CEMCA video competition. We had lots of questions after the screening aimed at the film-makers as we had lots of community radio people in the audience. They expressed their desire for their efforts to be documented through a film just like Ramvati’s.

Afternoon session concluded with an in-house film of DEF ‘Chanderiyaan’ by Rohit Dhall. The film is about efforts of Digital Empowerment Foundation (DEF) in collaboration with Media Labs Asia to provide technical education to the textile weavers of Chanderi, a historical town in Madhya Pradesh, central India. Rohit addressed the audience after the screening.

The last session of the film festival, the evening session began with a film from Nepal ‘Wireless Rural Nepal: The Village Facebookers’ by DJ Clark. It is about Milan Lohani who leaves his small farmhouse in the Himalayan foothills and walks half an hour to school. Milan’s school library had relied on second hand books sent by overseas donors until three years ago internet came to town. It has taken him and his classmates little time to work-out how to utilize the information they find online for getting news, information for study and helping their families farm. Like other teenagers around the world they also use the web for social networking. DJ Clark couldn’t make it to the festival as he is based in China these days. However, he made sure that he interacted with the audience, if not in person then virtually, which was made possible by technology.

A film from Nepal was followed by a film from Bangladesh ‘Tale of Shetu’ by Amader Gram. It is about optimum utilization of ICT tools for women empowerment. Unfortunately, the Director of the film could not make it to the festival. However, we had him with us in spirit.

The session concluded with the re-screening of ‘No Problem’ by Yasmin Kidwai on popular demand from the audience.

This is just a beginning. Our goal is to scale-up the ‘Digital Inclusion Film Festival’ as an independent event in the near future. We aim to take it all over South-east Asia and Asia Pacific, to give an impetus to the promotion and production of more films on the use of ICT for development across the region.

We have a mission, which is much closer to realization than one would imagine.